The following story appeared in The Franklin Press on March 19, 2019 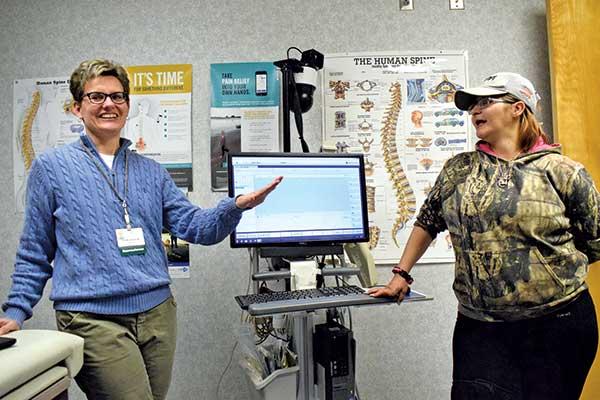 It turns out she had had an epileptic seizure.

“I didn’t know what was going on,” said Clark, who lives in Franklin. “Scottie, my husband, said I was getting in the car and I just stared out into space. He got kind of annoyed because he thought I was ignoring him, but when I hit the ground he knew something was up.”

She was taken to Angel Medical Center, where doctors decided to keep her overnight for observation.

“When I got upstairs to my room, that’s when I had my second seizure,” Clark said. “It was strange, and after I was told what was going on, it scared me. Having two in one day, I was scared.”

It just so happened that Mission neurologist Dr. Suzette LaRoche was at Angel that day, finishing setting up a satellite seizure diagnostic clinic. Clark’s primary care doctor referred her to LaRoche, and Clark was given an electroencephalogram right away.

Clark didn’t have to go to Asheville for a diagnosis, which was the process before Mission opened the seizure clinic at Angel.

LaRoche and an EEG technician travel to Franklin on the third Monday of each month to diagnose people who may have had a seizure. Angel recently received a diagnostic device that makes an evaluation process relatively quick and stress-free.

“I was the guinea pig,” Clark said. “I was scared to death. Back in the olden days, they would have to shave your head to connect the electrodes. Now they don’t. It just sticks to you. Which is not as scary. I slept.”

“Right now it’s just one day a month, but if we get busier we certainly would look at me being here more or maybe having a nurse practitioner assistant to help me see more patients,” LaRoche said. “Right now the most we can see is seven or eight a day.

The AMC clinic was established to make it easier for residents of rural Western North Carolina to find help.

“We were noticing that without the specialty care here, a lot of people were showing up back in the ER for repeat seizures,” LaRoche said. “This is not the right way to take are of people who have seizures.”

Travel time to Asheville is an obstacle to patients, she said.

“There are a lot of folks who just can’t make it to Asheville,” LaRoche said. “A primary care doctor might refer to Asheville because they know the patient needs a seizure evaluation, and it’s two hours or longer from Franklin, longer if you’re in Murphy or Cherokee. And then there’s driving restrictions. If you have had a seizure in the last six months, state law says no driving.”

Now, when someone gets referred to Mission for a seizure evaluation, hospital schedulers now have Angel as an option for rural residents.

“If you’re from Murphy, Andrews or Cherokee – anywhere west of Haywood County, we’re trying to get those folks scheduled here,” LaRoche said.

The EEG exam takes about an hour.

“We run the EEG, look at and make an interpretation,” she said. “Then we sit down and we’ll talk about history, do a neurological examination and then, because we have all that information, we’re usually able to make a diagnosis and develop a treatment plan right away.”

Epilepsy occurs in about 1-2 percent of the population, “so it’s really common,” LaForge said.

Seizures can occur at any age, usually without any warning.

“About a third of patients who have epilepsy, we have a pretty good sense of why,” LaRoche said. “There’s been a stroke or a traumatic brain injury. In younger kids it could be traumatic birth or development problems. And then it’s genetics in a lot of folks.

“But about two-thirds of the time we won’t come up with an immediate cause, so that’s why it’s so traumatic when people start having seizures for the first time,” LaRoche said. “It’s completely out of the blue.”

Clark had 16 electrodes attached to her head, and the EEG results indicated a slight abnormality. Her seizures may stem from scar tissues left over from brain surgeries she had as a child.

“Once you make the diagnosis it’s really about getting the right dose of the right medication,” LaRoche said. “We might have a couple of visits in a row to get the medications going well. Then the patient can go back to the primary care doctor.”

LaRoche has this advice for Macon County residents who suspect they’ve had a seizure: Consult your primary doctor to be referred to the AMC seizure clinic.

“If they’ve been putting if off getting evaluated, they can get help now,” she said.

It took a couple of tries to get her medication set, but Clark has had no more seizures and is experiencing no adverse side effects.